Darned busy week, but it's been but a fun one!

If you recall in my previous post I had shown a tangle from my sketchbook, Unraveling.  Well, I had some old mixed media canvas blocks which were gathering dust in my studio for a few years and I found them this week and thought, yes, I can do a tangle like Unraveling on these blocks which already have good background color on them.  So that's what I did while listening to the blah, blah, blah of the t.v.  It was nice quiet evening time with family, which is so very precious to me.

I then continued to work on the leaves with the Strathmore Mixed media paper, this time with Acrylic inks over tangles with micron pen.  Here's the result which is mixed too.  The color was good but the movement of the inks was not as I would like it to be, but you have to experiment to find out these things. 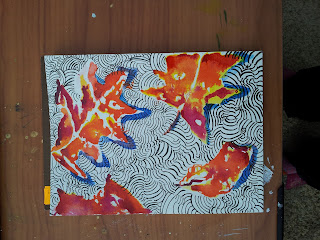 So I am doing the same thing on Arches 140 hot press which I haven't used in a while.  I used inktense for an under painting which seemed to retard the spread of the subsequent watercolor layers and speed up drying for some reason.  This is a beginning stage. 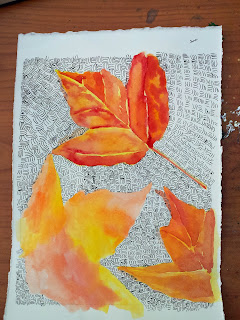 Also taught a private Zantangle class this week. One student had tangled for 5 months and the other never before so was fun to teach.  Here are their tiles, well done!
The more experienced student had done some tangling on various surfaces including Gourds and Rocks and here are a couple of pictures of his beautiful work. 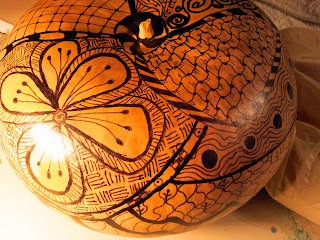 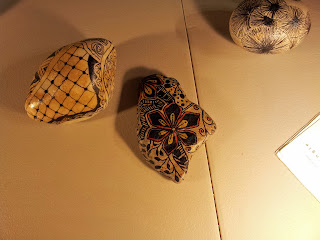 I have been loving adding Zentangles to my acrylic paintings which I started painting in Flora Bowley's Bloom True online class.  The elephant in this one emerged on it's own.  Elephants symbolise the Highest True Self.   This piece which may not be done quite yet, is called "Jungle YaYa!"  A Yaya is an old Greek Grandmother. 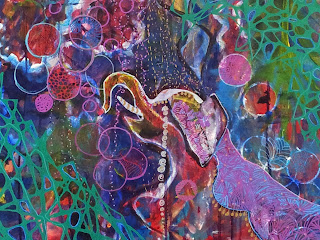 Quittin' time, more in a while. One more shot of the Studio Dog, Libby who is has had cast on for three weeks and is very, very, very bored! 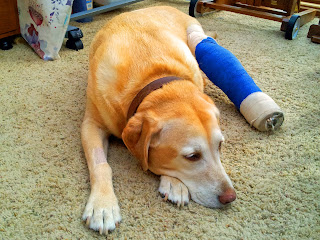